Copper pipes are good choice but can still develop leaks.

If your pipes are frozen or you have frozen pipes leaking, CLICK HERE NOW.

Friction from continuous movement of water can also cause weakness in the copper pipe wall just like a fast moving river eroding along a bend in the river bank that it is rubbing against.

Pitting and corrosion of copper pipes may be an indication of the general condition of your copper pipe system but does not necessarily mean that the entire copper plumbing system has to be repaired. Sometimes only a small section of copper pipe may have to be replaced because pitting may be only local. We can assess your situation to determine how you should remediate a leaking pipe situation.

Galvanized pipe was the plumbers’ pipe choice as late as the 1960s. A telltale sign of galvanized piping in your house is finding rust in your water when you let the water run. Even overnight, still water in your galvanized pipes will form rust. Clothes that are washed from water in galvanized pipe system are often dull and non-descript due to rust in water masking the true colors of your white and light colored clothes. 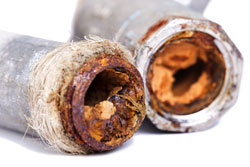 If you are finding rust in your water, this is a sure sign that your galvanized pipe walls are eroding and getting thinner as time passes. If your home has galvanized pipes, this condition should be remediated even if it has not already started to leak. Not only does galvanized pipe rust from inside out, almost in every case there will be a buildup of minerals like calcium. When this happens, the amount of water flow is gradually reduced. Valves do not close properly and often water is being wasted 24 hours each day. Calcium and rust affects the efficient operation of your plumbing fixtures. Buildup of calcium inside pipes constantly narrows the inside pipe diameter. As time passes, water flow will become less. So whether pipes are leaking or not, a lot of pressure problems will be solved if old galvanized pipes will be replaced with copper pipes.

If galvanized pipe is mechanically joined to copper pipe, because 2 different metals are in contact with each other, a galvanic or electrolysis reaction causes pipe corrosion, resulting in premature reduced life of the plumbing pipes behind your walls. If this is your scenario, it is best to replace the entire galvanized pipe plumbing system with highly resistant to corrosion copper pipes to minimize the risk of leaking pipes hidden behind the walls that no one sees. If this leaking pipe situation will continue without remediation, rotten wood could result, affecting the structural integrity of your house and can also result in growth of mildew and mold.

If you have any signs such as rust, low water pressure and leaking pipes, gives us a call and we can give you advice and assist you in making the most economical decision for your immediate plans or long term pipe solution.