Why You Should Unplug Your Unused Electronics 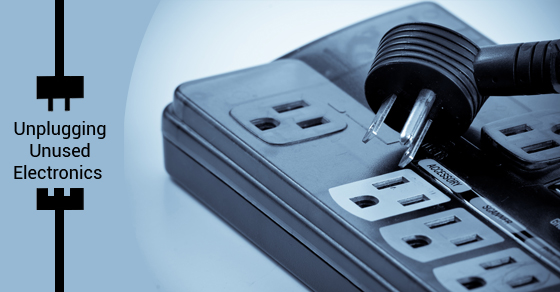 Many people don’t realize that even when their TVs, computers and other devices are turned off they’re still drawing juice from the electrical system.

This is bad not only for your electrical bill, which can see noticeable gains from the constant energy-demand, but also the resulting environmental impact from your power utility, most of which don’t generate electricity using sustainable energy sources.

Learning about vampire electronics serves as a wake-up call for many.

Some of the worst offenders for constantly draining energy even when turned “off” are:

Now, it’s not practical for some devices to be completely unplugged every time you’re not using them – cable modems that provide an Internet connection in a wifi-enable home, for example, or coffee machines that are programmed to start brewing at certain times. But for other devices, this argument falls short.

For example, does your home computer really need to be sipping energy when it’s just sitting there, turned off? Same goes for your TV, which will not really turn off, but go into a sort of “standby” mode that continues to draw power (look for the telltale always-on red light on the front of the screen).

For these no-use-while-off items, you should reach down and pull the plug when they’re not being directly used.

Another, even better option is to take advantage of power strips (aka power bars). By plugging in multiple energy-vampire devices into a power strip (say, your home computer, your computer desk lamp and the home printer) into a single power bar, you can shut off the idle power to these devices by simply pressing the on/off switch on the power strip.

Other devices that you want left on, such as your home Internet modem and router, can be plugged into another power strip, letting you break up your control over idling power by letting the devices that really need it remain unaffected.

In the living room, a good combination to plug in your TV, home receiver and video game console into a single power bar.

It’s also a good idea to make sure any electronic devices you do buy are energy efficient. Look for the ENERGY STAR designation while shopping for electronics to help you make the greenest choices!